Holidays and Celebrations around the World 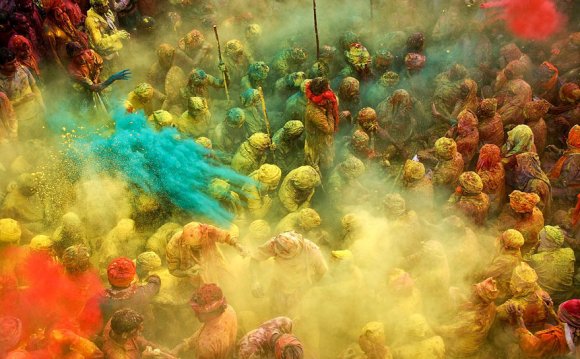 There are hundreds of holiday traditions around the globe, many of which you've probably never heard of - the giant goat made of hay (Sweden), the witch that brings candy (Italy), the burning pile of dirt (Guatemala). But these are the top nine most unexpected, random, weird, awesome holiday traditions from around the world.

Awww, look at the little Tió de Nadal (Christmas Log). Yes, it's a log with legs and a face and a little red hat. It may seem like a joke that just caught on, but the tradition hails from old Catalan mythology. The log is introduced in Catalan homes at the Feast of the Immaculate Conception every Dec. 8. Leave food out for your little log each night. He gets hungry you know. And don't forget a blanket! He might get cold. And when the kids aren't looking, hide presents under the blanket. You see, the log is hollow, and well, the idea is that it's pooping out the gifts.

Night of the Radishes - Oaxaca, MX

Every Dec. 23, the Mexican state of Oaxaca presents the most impressive display of carved vegetables in the world. The radishes are grown especially for this event, and remain on display through Christmas day. The miniature exhibits depict the Nativity scene and other events from Mexican folklore. Originally, the tradition of radish carving was done by shopkeepers who wanted to entice people into their stores. Today, it's a three-day festival.

What began as a nonsensical gathering of San Franciscans dressed as Santa Claus, has become a worldwide pub crawl. Celebrating its 20th anniversary in 2014, the official website describes it as "a conventions of santas - groups of men and women dressed as Santa." That's all it takes? Well, as specified in the very important guidelines, one cannot merely show up in a Santa hat. And one must address every single participant as "Santa." Alrighty then.

The Ukrainian tradition of adding spider webs to the Christmas tree is odd, until you learn about the legend. In a nutshell: a poor widow lived with her children in a cold, damp hut. Her children had their sights set on a young Evergreen tree growing outside as their future Christmas tree. But they had nothing to decorate the tree. The woman cried herself to sleep that night, but the household spiders took note of her despair, and covered the tree in their intricate webs. In the morning, the sun hit the tree, which shimmered in silver and gold thread. From that day on, the widow never wanted for anything again.

Festivals and Celebrations around the World

Holidays around the world

Celebrations Around The World