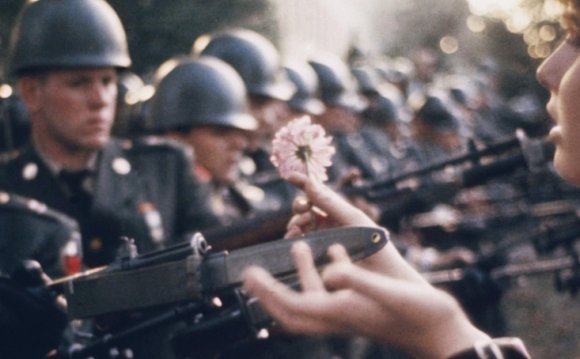 For those looking for nostalgia beyond the confines of “Mad Men, ” PBS has responded to the 40th anniversary of the Vietnam War’s end with its own multipronged campaign, exploring the conflict from a variety of angles. Three of those will air on successive nights, with Rory Kennedy’s “Last Days in Vietnam” joined by the equally first-rate “Kent State — The Day the ’60s Died, ” about the 1970 university shootings, and the more poorly constructed “The Draft.” Watched in concert, they create a compelling portrait of the war and its lingering ripples through politics and culture up to the present.

“The Day the ’60s Died” talks to all the right people — including former Richard Nixon aide Pat Buchanan — in chronicling the growth of the antiwar movement on college campuses, and the hostility toward the protestors elsewhere. In perhaps the most sobering clip, after four students were slain by National Guardsmen at Kent State U., a woman interviewed on the news says flatly, “I’m sorry they didn’t kill more.”

Perhaps the most extraordinary sequence involves Nixon’s impromptu early-morning visit to the Lincoln Memorial, where he spoke with antiwar advocates. That came after contributing to an atmosphere that resulted in violence against the students, some felt, by referring to them as “bums.”

As the documentary makes clear, while the movement was ultimately forced into retreat — doubtless playing a role in Nixon’s landslide 1972 victory over George McGovern — its obvious heirs included those fighting for women’s and gay rights, as the protestors lost the short-term political battle but laid the foundations for changing the culture. Although the then-student activists are now the age of the average Fox News viewer, it’s clear throughout how Vietnam, in all its facets, has continued to be litigated in all the decades since the U.S. sought what Nixon characterized as “peace with honor.”

“The Draft” also tackles an issue that has had lasting impact, but an hour is hardly enough time to chronicle the entire history of conscription (including the Revolutionary War and the Civil War draft riots), the fissures opened during Vietnam and the inequity that has existed since, with the shift to an all-volunteer army. In addition, director Aaron Matthews employs devices more suited to the History channel than to PBS, from the unnecessarily urgent scoring to the use of dramatic recreations to illustrate pre-video wars.

“Last Days in Vietnam, ” previously reviewed out of Sundance in 2014, is a detailed look at the war’s closing days and the attempts to save pro-American Vietnamese whom a war-weary Congress was all too willing to abandon to the cruelest of fates as Saigon fell. Weaving in remarkable footage, the doc is greatly enhanced by the vivid recollections of both Vietnamese who escaped (and some who didn’t) and the Americans who in some cases risked their careers in seeking to help them.

TV often devotes too much time to arbitrary anniversaries, but this programming around Vietnam is more than just history. And most of it is very much worth the time, although for those who choose to be selective, it’s probably advisable — all irony aside — to avoid “The Draft.”