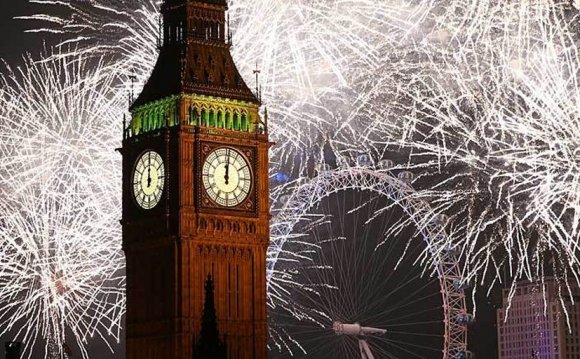 Now, slowly but surely, the year of 2015 is drawing to a close. For many of us, it has been a good year; though some of us, perhaps, will be happier to put the occasional event behind them. In any case, we’re hoping that everyone has a happy, healthy and prosperous year in 2016 – all over the world. And this is where it get’s exciting: how exactly is the New Year celebrated in other nations?

The thought aroused my interest, and I started to do a bit of research. It didn’t hurt that we have no shortage of colleagues in other countries, to put it mildly – so I posed the following questions to some of my colleagues at our facilities in Germany and abroad:

Do you also celebrate the arrival of the New Year on 31 December? And what form do the celebrations take on New Year’s Eve?

Clearly, of course, my questions are not exactly empirical, and there are a whole lot of regional and personal differences – nevertheless, I really appreciated the highly disparate stories my colleagues told me.

The trip begins in the Ukraine with some revelations from Lyuba:

“There, New Year’s Eve is celebrated in style on 31 December. Only after this, using the Julian Calendar, come Christmas and festivities to mark the “old new year” in January. At the first big New Year’s festivities, the children get a visit from Jack Frost and his companion Snegurotschka – but they first have to earn their presents by dancing, singing or reciting poems. Many of the customs with which we hope to secure good luck for the upcoming year have a bit of an Asian feel to them; a clean and tidy house on the first day of the New Year is important here, so that good luck feels at home and has enough room. But it’s imperative to clean the house properly before the New Year arrives: because if you use a broom at the beginning of the New Year, you’ll be sweeping the good luck straight back out.

It’s around 800 kilometres from the eastern border of the Ukraine to the west of Kazakhstan – not exactly a stone’s throw. For me, happily, it’s not that far to my nearest colleague with a Kazakhstani background.

Elena told me how they celebrate the New Year in Kazakhstan – and is almost a bit disappointed that some of the customs resemble those in Germany.

“In Kazakhstan, New Year’s Eve and New Year’s Day are basically reserved for the family. All the siblings (together with their own families, if any) come to their parents’ home – so in large families it’s not uncommon for parties to number 40 or 50 people. On New Year’s Eve itself, exuberant celebrations are the order of the day, with food, drink, music, dancing, and fireworks at midnight. On New Year’s Day, you then visit your parents or grandparents again, and wish them luck for the year ahead. But then there is indeed a difference: the bearer of these wishes scatters some barley and recites a poem. The children are then “rewarded” with a small sum of money from the grandparents. And then the New Year is welcomed with a lunch, at which a noodle soup is the traditional starter.”

From Kazakhstan, we cross the border to China. And my colleague, with her Chinese roots, is ideally placed to fill me in on what are for us distinctively unusual customs.

“In China, we don’t celebrate New Year’s Eve, but the New Year itself, also known as the Spring Festival, 春节 CHUNJIE. This can last up to 14 days, and is governed by the lunar calendar, which means it’s on a different date each year – but generally falls between 20 January und 21 February. Most people will be familiar with our 12 animal-themed zodiac signs, 2016 will be the Year of the Monkey. The New Year celebrations rank in China among the most important festivals, and mostly we spend the time with family and relatives. This is why every year, punctually in time for the festivities, a mass migration begins in China: they are all going home to celebrate with their families. The traditional meal here is “Jiaozi”, pasta pockets. And the colour red is omnipresent. For example, people give each other red envelopes filled with money 红包, with wishes for the New Year printed on them.”

Another fascinating sidelight: during the days of the New Year celebrations never, ever buy shoes: the word “shoe” (鞋子, Xiézi), you see, resembles the word for bad, evil and unhealthy d (邪, Xié) much too closely. A similar problem arises with having your hair cut. “Hair“ and “Good Luck”, you see, are the same word (發 / 发, Fā) – so keep your hair on! And Lubya’s already explained the custom of house-cleaning – in China, too, you’re expected to do some thorough cleaning before the New Year arrives.

From China, I then make my way south. To Thailand. Danny is able to tell me a bit about the customs there:

“In Thailand – rather like here in Germany, we let off fireworks and rockets. The main thing is for it all to be as noisy and colourful as possible, so that the evil spirits are driven away. Traditionally, the festival is governed by the Buddhist calendar, i.e. it depends on the Moon, and is not celebrated until April. But the young, modern Thais usually celebrate the New Year on 31 December, together with the Western world. And others again stick with the Chinese custom and celebrate their New Year in February.”

After a hop over the Pacific Ocean, my “research trip” takes me to Argentina, where Sabrina lives:

“The food is very important to us on New Year’s Eve. Normally we eat “asado” for dinner, ultra-delicious grilled meat. Other typical delicacies include “pan dulce“” (rather like brioche) and “vitel tone”. Because it’s summer down where we are, we often celebrate New Year’s Eve outdoors, but always with the whole family! At midnight, we then make “brindis” (toast) and look at the fireworks.“

I stay in South America for a while – surely there are differences between the various countries involved there as well?! And indeed there are. In Venezuela, for example, you will find some similarities with Argentina, but also some entirely new elements.

My colleague Rusmel kindly took the time to tell me about it:

“The family is the most important thing on New Year’s Eve! That’s why at midnight everyone’s at home and not out with friends. Mostly, people get together at their grandparents’ home, so the whole family is assembled. Shortly before midnight, it’s traditional to eat twelve grapes – which symbolise twelve wishes for the New Year. Talking of symbolism: you welcome the New Year in Venezuela dressed in entirely new clothing; even new shoes are bought specially for the occasion. You then put cash in different currencies in your trouser pockets – so as to begin the New Year well-dressed and with money in your pockets. When the grandparents then gradually bring the festivities to an end after midnight, the young people meet up with friends and go out together.”

A bit further north, how do they celebre New Year’s Eve in the USA? Nico has partied into the New Year several times over there:

“In the USA, people celebrate with friends and family. With food, fireworks – and kisses. At midnight, you see, everyone kisses everyone else nearby on the lips. And if you’re spending New Year’s Eve in New York, there’s a far-out experience to look forward to: you get to see a huge firework display and the traditional “Ball Drop” in Times Square.“

Then my quest for information proceeds to a quite different cultural environment: more or less without any prior knowledge at all, I ask Irene, a colleague at Krones East Africa, how people celebrate the New Year in Kenya.