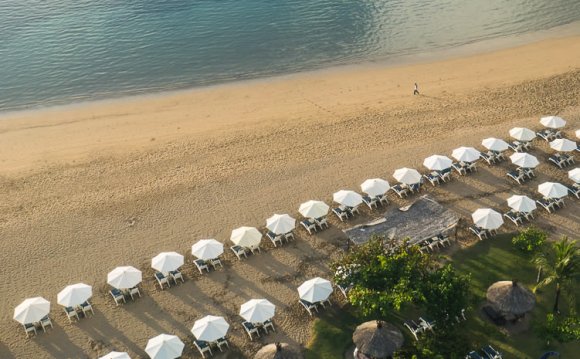 The footballing icon is dipping a toe into tourism with a new deal with luxury resort company Las Vegas Sands. The business owns some of the world's glitziest properties including The Palazzo and The Venetian resorts in Las Vegas.

Beckham's attentions, however, are on the expanding Far Eastern market. As part of a new partnership, the star will be working with the Macau incarnation of The Venetian and Marina Bay Sands in Singapore, two of Asia's highest profile hotels.

Big hitter: The Marina Bay Sands resort in Singapore cost £4bn to build and opened in 2010

Michael Leven, president of Las Vegas Sands said the partnership would be mutually beneficial: "We have billions of dollars invested in our own global, iconic brands and we clearly understand the importance of growing and sustaining those brands over time. The odds are extremely high that a partnership with David Beckham will help us further those efforts and provide David with the same benefit."

Largest casino in the world: The Venetian Macao is a luxury hotel resort owned by Las Vegas Sands

Beckham added: "The Sands team has created amazing resorts in Singapore and Macau. The scale, vision and caliber in all that they do is impressive. I am very excited to be working with them to develop a range of new business ideas in a part of the world that I love spending time in and is full of optimism and growth."

The Marina Bay Sands resort opened in 2010 to great fanfare. The enormous hotel, which dominates the Singapore skyline, has 2, 560 rooms and suites, a fleet of celebrity chef restaurants, shopping areas, theatres, a museum, a casino and a crystal pavilion.

Happy spectator: The father-of-four saw Manny Pacquiao take on Brandon Rios for the title at the Venetian Macao Hotel

The star, who's already a 'global ambassador' for the China Football Association, is currently in the Far East on a promotional tour. Beckham watched boxing superstar Manny Pacquiao fight in Macau on Sunday night.

Tourism to the destination, a former Portuguese colony turned administrative region of China, has boomed, mainly thanks to the gaming industry.

Its 35 gaming houses are the only places where Chinese nationals are allowed to gamble in casinos, and revenues are soaring. Macau gambling profits are expected to be seven times those of Las Vegas this year.

However, China's central government is calling for Macau to attract more tourists, not just hardcore gamblers, and hosting sports events is a direct way of doing this.